The oldest record of the bells we have is in the national 1552 Edwardian Inventory of Church goods. It says “iii bells and a sanctus bell”. The Sanctus would have been a small bell probably not in the tower. There are still three bells in the tower. They are in a minor key and sound very mournful. Through the years they have been damaged and recast. The smallest bell was recast in 1653 by George Oldfield I of Nottingham; the second bell in 1599 by a member of the Newcombe family of founders in Leicester and the largest bell by Thomas Hedderly I of Nottingham in 1765. The second bell is on a preservation list because of its antiquarian interest. It is also the best sounding bell in the tower at present. 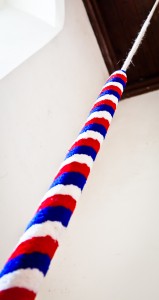 By 1950 everything had fallen into a parlous state of collapse. Only the bells could be saved. They had to be entirely rehung on new fittings in a new cast iron and steel bell frame. At the time it was hoped to hang one larger bell, note G, to turn them into a major key and two smaller bells to produce a proper peal of six bells. Indeed the new bell frame was designed to hold this projected peal of six bells. It seems the money ran out before this could be done. Now unexpectedly the three needed bells have been offered by donors. This will however entail an expenditure of about £12,000 to make this happen in the way of fittings for the bells and hanging them in the tower. The bell frame and the fittings of the present bells need refurbishment as they have not had any maintenance since 1950.

The Diocese of Leicester, in which Ab Kettleby falls has approved the work and given the necessary permission to proceed by way of a Faculty as soon as we have the funds to do so. Much voluntary assistance has been offered involving the local and village community. A local group of people are already being taught bell-handling and change ringing on the existing peal of three. Three bells do not provide facility for advancing the typical English art of Change Ringing. Indeed, there are only six different ways of ringing three bells, yet six bells yield 720 possible combinations.

For a number of years Ab Kettleby Church was closed but the villagers got together and raised and spent £250,000 to make it safe to reopen. This has been done but still another £20,000 at least is needed to complete the job. English Heritage was so impressed that recently Ab Kettleby was given the Angel Award for the best restoration in England over all other restorations both secular and ecclesiastical.

It might seem unsuitable to try to raise money for bells at this time, but we have decided to do this as the offer of more bells has been made and may never happen again. We will take great care not to affect the raising of money for the Church building itself by not appealing to charities they are thinking of asking.